Independent financial analyst and geologist Matt Badiali discusses the new technology that Nevada Exploration is using to search for gold in Nevada.

On one memorable episode of “How the Earth Was Made,” Dr. Richard Goldfarb of the Colorado School of Mines dropped a challenge to gold explorers everywhere: Find Nevada’s missing gold.

Nevada is one of the most prolific gold producing regions in the world. It’s some of the most desirable real estate in the world for gold exploration. And Goldfarb’s missing ounces are a huge story, worth hundreds of billions of dollars.

In Season 2, Episode 13 was all about gold. The show took a deep dive into Nevada’s extraordinary gold fields. Around 35 minutes in, Goldfarb said:

“There is no reason not to assume as much gold still exists as has been mined in the past, but prospectors, explorationists, and geologists have found the easy gold.”

The rest of that gold is a challenge because it’s hidden under cover. Finding that gold, without spending hundreds of millions of dollars, remains the biggest hurdle in the industry today.

We can only see half of Nevada’s prolific gold strata. The other half sits under layers of silt and gravel eroded from the mountains.

That’s because this part of Nevada deformed as a hot plume of mantle rock rose under it. As the hot rocks boiled up from the deep earth, the land domed up and then partially collapsed.

The remaining part of the dome became mountains. The collapsed sections became valleys. It’s all the same rockwhich led to Goldfarb’s conclusion that there was a lot of gold left to find.

Nevada produced over 248 million ounces of gold out of the rocks we could see. If Goldfarb is correct, that much could be left in the rocks that sit out of sight, under cover.

As you can see from this map, roughly 55% of Nevada is under cover: 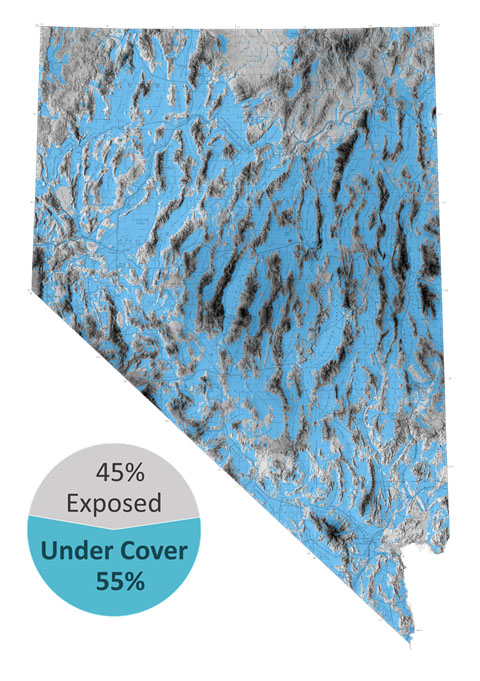 That’s a huge opportunity, but it takes new science to do it.

Fortunately, exploration geologists have a huge boost. It comes from the same technological explosion that created our smartphones. Laboratories can now detect concentrations of metals in water to parts per trillion.

That’s like being able to pick out specific pennies from a billion dollars’ worth. Or like finding a single person out of all the people in the world.

Since water is the universal solvent, everything it touches leaves a trace. And in Nevada, that means gold deposits leave their trace in the ground water.

The company began drilling the project in March 2021.

The amazing thing is, they are so confident in this process that they published all of their model data online.

That means anyone can see what they found and why they are drilling. In addition, they published a video tutorial explaining the process as well.

The science is exciting. The potential is enormous. And Nevada Exploration is still tiny, with a market cap of just C$20.3 million.

The risk reward setup on this stock looks outstanding. If you want to add a talented team, with enormous upside potential, check them out. I’m so excited about the project that I joined President James Buskard to talk about it on Streetwise Live!

Matt Badiali is a geologist and independent financial analyst. He spent fifteen years researching and writing about great investments inside the natural resources sectors. He can be reached at www.mattbadiali.net.

Read what other experts are saying about:

4) The article does not constitute investment advice. Each reader is encouraged to consult with his or her individual financial professional and any action a reader takes as a result of information presented here is his or her own responsibility. By opening this page, each reader accepts and agrees to Streetwise Reports’ terms of use and full legal disclaimer. This article is not a solicitation for investment. Streetwise Reports does not render general or specific investment advice and the information on Streetwise Reports should not be considered a recommendation to buy or sell any security. Streetwise Reports does not endorse or recommend the business, products, services or securities of any company mentioned on Streetwise Reports.
5) From time to time, Streetwise Reports LLC and its directors, officers, employees or members of their families, as well as persons interviewed for articles and interviews on the site, may have a long or short position in securities mentioned. Directors, officers, employees or members of their immediate families are prohibited from making purchases and/or sales of those securities in the open market or otherwise from the time of the decision to publish an article until three business days after the publication of the article. The foregoing prohibition does not apply to articles that in substance only restate previously published company releases. As of the date of this article, officers and/or employees of Streetwise Reports LLC (including members of their household) own securities of Nevada Exploration, a company mentioned in this article.