Silver is up even more. However, I bet few readers know that copper (“Cu”) at $3.72/lb (near an 8-year nominal price high) has soared +87% from its 52-week low. In the midst of a global pandemic, Cu has been one of the best performing commodities.

Copper fundamentals are strong, not just for this year and next, but for a long time to come. Goldman Sachs believes the world is entering a multi-year commodities super-cycle.

A renewed push for global decarbonization (with the U.S. back in the game and climate change increasingly undeniable) is one of several key factors pointing towards a new super-cycle thesis.

Copper fundamentals are strong for decades to come.

The 2020s will be remembered for massive deficit spending/debt issuance, which is bullish for precious metalsbut also for base metals. Tens of trillions of dollars will be spent on giant Cu-intensive infrastructure and green energy projects. Renewable energy projects require 5x the Cu of fossil fuel plants.

The paradigm shift to vehicle electrification will boost Cu demand as well. EVs require 4x the Cu of internal combustion engine cars. Not to mention that Cu soon to be needed for 18-wheelers, delivery vans, construction, mining, military vehicles and equipment, ocean-crossing container ships, etc. Prodigious quantities of Cu will be required to build a vast battery charging infrastructure to make it all work.

Strong Cu demand is all but assured, but global supply is increasingly precarious. Many of the largest Cu mines are also the oldest and deepestsome date back to the 1800s. 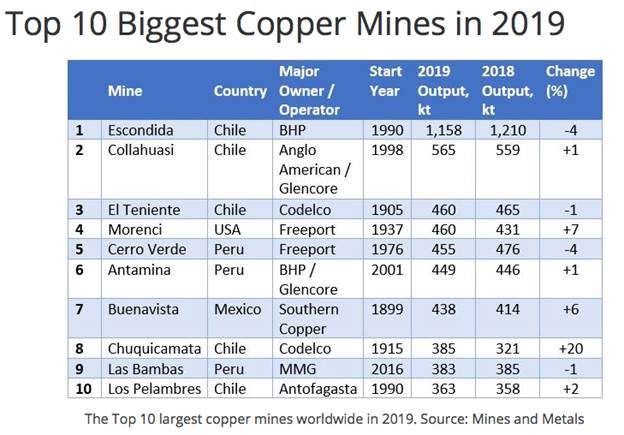 Mined Cu grades have been in decline for decades, as has the number of new, blockbuster Cu discoveries. Several well-known open-pit mines are now operating at grades at or below 0.25% Cu. That’s US$19/tonne rock.

.but copper supply is increasingly uncertain

Everything I’ve written points to one critical takeaway. Higher Cu prices are necessary to incentivize mining companies to invest billions of dollars, over 1020 year periods, to develop reservesand then plan, permit, fund and build mines, processing plants and tailings facilities.

Adjusted for inflation, the all-time high Cu price breached $6/lb in the mid-1970s. In 2011 it was >$5/lb. The 2020s will likely see a new record high price. That’s great news for up-and-coming Cu juniors with (prospective) mines opening this decadenot so good for old, high-cost, low-grade mines nearing end of life.

Chile is by far the leader in Cu production, accounting for 28% of the world’s mined copper in 2020. But, cost inflation and lower grades are taking a toll. Obtaining water to operate the mines, many of which are at elevations above 3,500 meters, is tremendously challenging, costly and time consuming.

Peru is the second largest Cu producing country, it delivered 12% of last year’s mined copper. It too has mines at high and very high! elevations (>4,000 meters). Northern Peru is widely considered to be more difficult for companies to do business in due to opposition to mining in some areas. 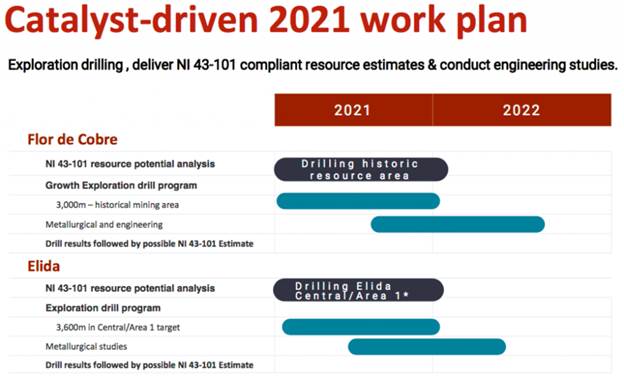 However, in the central and southern parts of the country, which in many cases have less population density, mine operations are better tolerated and permitting is easier to achieve.

In the most recent Fraser Institute Mining Survey, Peru ranked higher than 7 of 12 Canadian provinces and (also) 7 of 12 U.S. states. Overall it ranked near the top of the second quartile.

Chile and Peru (a combined 40% of 2020 mined Cu) have been great jurisdictions to work in. Looking forward, both countries will likely remain Cu powerhouses, but fresh new mines will lead the way as aging, depleted mines shut down.

A newly listed company that’s well positioned with two 100% owned, potentially world-class copper porphyry projects in Peru is Element 29 Resources Inc. (ECU:TSX.V). Both projects are at <2,500 meter elevation, a level that does not require specialized equipment as is often the case for mines at elevations >4,000 meters.

Unlike for a growing number of properties in Chile, water is not expected to be an issue for Element 29. In fact, one of the two projects is close to a river. Both are outside of northern Peru, in the more mining friendly southern and central parts of the country. And, both are <100 km from the coast. 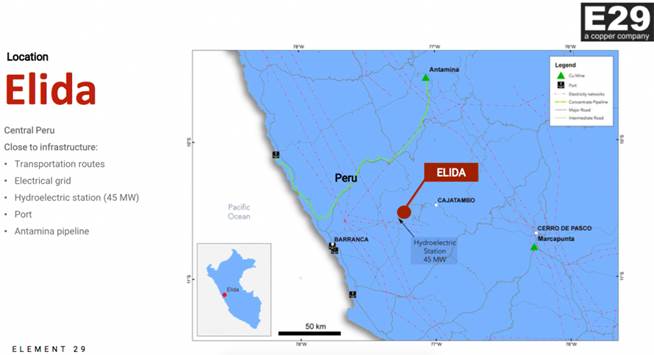 The property consists of 28 mining concessions totaling 19,210 hectares. It’s a cluster of at least four porphyry centers, with only the central target drilled.

This is no pie-in-the-sky three-year goal. Element 29 is funded to deliver a NI 43-101 resource that could be >200M tonnes by Q1 2022. Management already has 18 holes, nearly 10,000 meters of historical drilling. The team needs to tighten up the spacing. A 3,600 meter infill drill program is expected to start in April.

In 201415, Lundin Mining completed a modern 18-hole / 9,880 meter drill program that intersected a robust porphyry system. All holes hit Cu-Mo-Ag mineralization. Most holes ended in mineralization, (some holes in moderately high-grade mineralization) meaning that the system remains open at depth. 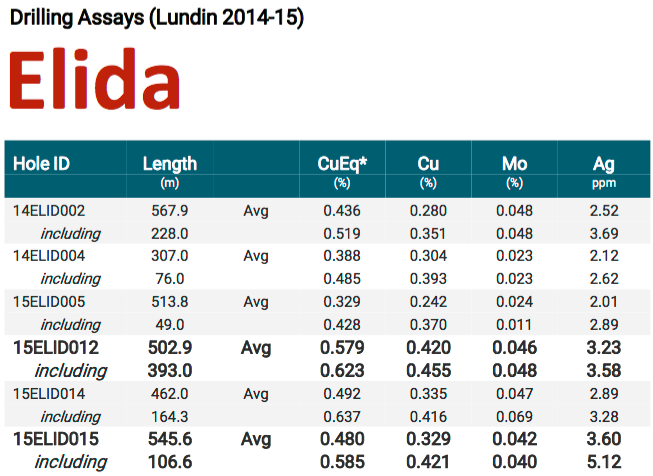 Drilling confirmed very significant areas of potential mineralization. Management believes there is excellent exploration upside. And, preliminary metallurgical studies are planned with existing core taken from prior drilling done by Lundin. In my view, this is a top-quartile global Cu exploration project.