Although gold has to battle higher interest rates, a stronger dollar and Bitcoin beating all-time highs as I am writing this, Golden Independence Mining Corp. (IGLD:CSE; GIDMF:OTCQB; 6NN:FSE) doesn’t appear to get fazed, and apparently has no trouble raising cash. On April 9, 2021, it closed a private placement of C$2.8 million, enabling it to do much more drilling this year, and potentially grow the resource even more on its Independence gold project in Nevada. The company was already financed to do a maiden NI 43-101 compliant resource estimate, which will be coming out in weeks, and a preliminary economic assessment (PEA) before year-end.

In the meantime, drilling is advancing in good fashion, almost every hole returning economic intercepts, verifying and expanding the historical 1.07 million ounce (Moz) gold resource, which has the usual hallmarks of a typical Nevada deposit: near surface, heap leachable oxides and deeper, higher grade sulfides. Let’s have a look at its progress so far.

All pictures are company material, unless stated otherwise.

All currencies are in US Dollars, unless stated otherwise.

The proceeds will be used for an upcoming drill program focused on both the recent high grade discovery in hole AGEI-32 and in expanding the resource in the north of the project, and I wondered if Doulis could elaborate a bit more about the nature of the investors involved in this financing. He couldn’t disclose much other than that the recent financing included two new institutional investors, which is always a nice stamp of approval.

This is all good news of course, as since the closing, the company currently has just over C$3 million in the treasury. As can be concluded, the earning in of the initial 51% interest by spending US$1.75 million of exploration expenditures by December 31, 2021, will be no problem at all. An additional 24% interest can be earned by incurring another US$10 million of work expenditures over three years, which could include everything, from drilling to economic studies to permitting. As management is expecting to end up with an economic resource of 1.52 Moz Au in a top jurisdiction like Nevada, this seems like a good bargain to me, especially with gold trading way above US$1,200/oz Au, likely the threshold to make this deposit economic according to my estimates.

One could argue that the financing diluted the existing shareholders with 23%, but since the share structure was already excellent with just a very tight 48.24 million shares outstanding, raising additional cash to potentially increase the Independence resource further should always have priority in my view, especially with the exploration odds in favor as the company keeps hitting gold. The new share count results in a still pretty tight 59.44 million shares outstanding, fully diluted standing at 70.46 million, with about half the warrants and options being in the money now. After discussing the recent financing, let’s have a look at where the company is spending its cash so far.

A new batch of results came in on April 6, 2021, representing the second last set of the 2020 resource expansion drill program, which was completed in Q1 2021. The company has been focusing on the northern area of the Independence Gold project, as can be seen on this drill hole collar map: 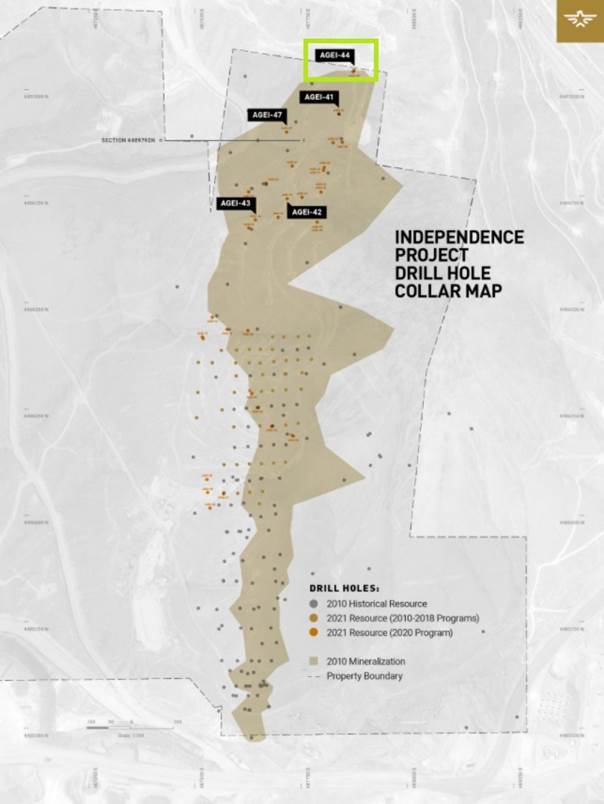 The northernmost hole, AGEI-44, has been highlighted above, as it shows a very useful confirmation of a historical hole, adding lots of mineralization although at low grade gold: 114.3m @ 0.22g/t from surface, plus 6.1m @ 0.968g/t Au from 160m, which is also well into open pit zoning. As discussed in my last article, the historical estimate from 2010 used a 0.25g/t AuEq cut off, and management will probably use a 0.20g/t AuEq or even 0.20g/t Au cut off, due to a higher gold price these days.

As a reminder, here is the table for the historical resource estimate:

The cut-off grade used in 2010 was predicated on a much lower gold price of US$850/oz, and silver price of US$13/oz at the time. There is no sensitivity on a lower cut-off grade, but usually decreasing a cut-off by 20% should increase such a deposit by at least 10% if not 20%. The low grade AGEI-44 hole, for example, didn’t make it in the historical estimate for example, and at an average grade of 0.217 g/t Au this hole alone would add about 15 koz of Inferred gold, if a standalone. But it seems mineralization is pretty continuous as AGEI-41, located about 125m to the south, also returned 88.4m @ 0.321g/t Au from surface, so if another infill hole halfway AGEI-41 and AGEI-44 could confirm these lengths and grades, this northern tip of the mineralized envelope could add an estimated 100-125 koz Au on its own.

The following table shows all results of the latest batch:

It seems the expansion to the north is progressing in an excellent way, but also as anticipated by management, which shows their skills and confidence in the project. A subject I also found to be very interesting is the super infill hole AGEI-32 (see also news release of March 16, 2021), which returned 24.4m grading 9.11 g/t Au and 25.2 g/t Ag, all oxides, just beyond the footwall (boundary below) of the oxide deposit, below historical/known mineralization. The location can be seen at this map: 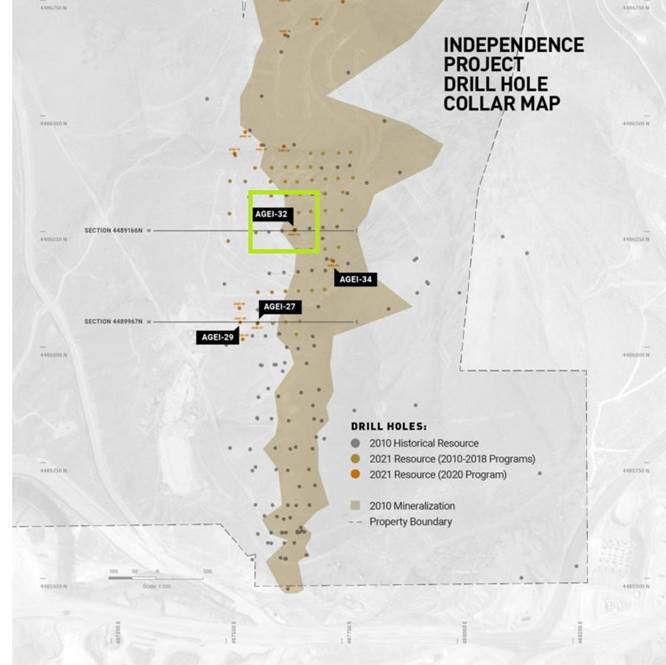 The following section shows the intercept relative to the historical/known mineralization: 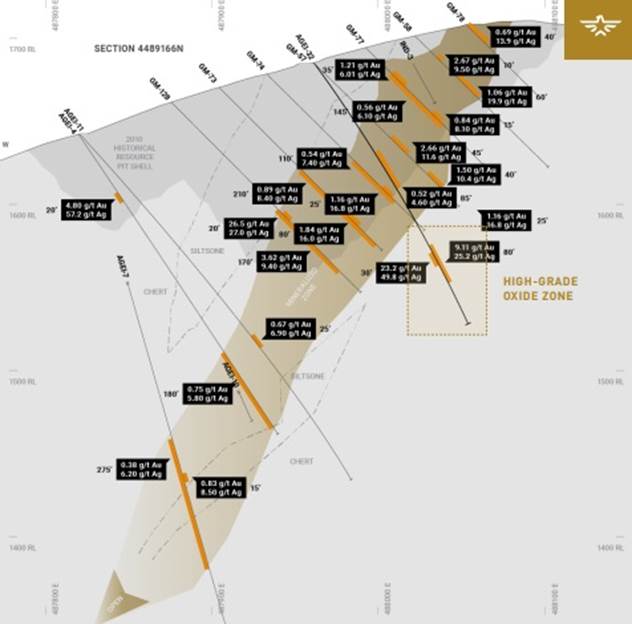 If a significant amount of higher grade oxide material could be delineated at these near surface levels it could significantly enhance the economics of this project. The average grade of this intercept is truly world class for oxide gold; I can’t recall I have ever seen such high grade oxides before. The company intends to resume drilling in this area in Q2 2021.

As a reminder and as a basic starting point taking into consideration what already has been drilled, a quick back of the envelope calculation on the 500 koz oxide scenario for Golden Independence assumes a 50,000oz Au for 8 year production, based on an average grade of 0.65g/t AuEq, with recovery of 80% for gold, 50% for silver. Based on 350 producing days per annum, this requires a 9,000 tonne per day operation, which, when using an average capex/tpd ratio of US$8,000/tpd, generates a capex of US$72 million. Using an average AISC of US$1000/oz Au, and an average combined (federal and state) corporate tax of 25% for Nevada, this results in a very decent after tax NPV5 of US$92 million @US$1500/oz Au, and an after-tax IRR of 34.7%. At a current market cap of C$15 million, this means the stock would be trading at just 10% of hypothetical NPV5, meaning a future hypothetical P/NAV in that case of 0.10, which is very low compared to peers at similar stage.

Although this is all hypothetical and very forward-looking for the time being, as Golden Independence first has to complete a maiden NI 43-101 compliant resource estimate, which can come out any day now, things are panning out well it seems. The maiden resource will likely be updated in Q4, 2021, hopefully including the highly anticipated high grade follow up drilling which will start within weeks, to be followed by a PEA expected at the end of Q4, 2021. Taking into account execution speed and resource/economics potential, this is one of the more exciting companies I have the privilege of covering the last few years.

Golden Independence did well to close an oversubscribed, non-brokered private placement to the tune of C$2.8 million, enabling the company to do much more drilling on its Independence Gold project, completing many more meters on, for example, recently discovered, extremely high grade oxide zones. The northern part already solidified lots of lower grade ounces. Management seems firmly on its way to delineate its previously stated bold estimate of 1.52.0 Moz AuEq, and a first step towards this number will be taken when the maiden resource estimate comes out soon. I can’t help but already looking forward to the next resource update and PEA, scheduled for Q4 of this year, as these reports could indicate the re-rating potential of this stock even better.

I hope you will find this article interesting and useful, and will have further interest in my upcoming articles on mining. To never miss a thing, please subscribe to my free newsletter on my website www.criticalinvestor.eu, in order to get an email notice of my new articles soon after they are published.

The Critical Investor is a newsletter and comprehensive junior mining platform, providing analysis, blog and newsfeed and all sorts of information about junior mining. The editor is an avid and critical junior mining stock investor from The Netherlands, with an MSc background in construction/project management. Number cruncher at project economics, looking for high quality companies, mostly growth/turnaround/catalyst-driven to avoid too much dependence/influence of long-term commodity pricing/market sentiments, and often looking for long-term deep value. Getting burned in the past himself at junior mining investments by following overly positive sources that more often than not avoided to mention (hidden) risks or critical flaws, The Critical Investor learned his lesson well, and goes a few steps further ever since, providing a fresh, more in-depth, and critical vision on things, hence the name.

Disclaimer: The author is not a registered investment advisor, and currently has a long position in this stock. Independence Gold is a sponsoring company. All facts are to be checked by the reader. For more information go to www.goldenindependence.co and read the company’s profile and official documents on www.sedar.com, also for important risk disclosures. This article is provided for information purposes only, and is not intended to be investment advice of any kind, and all readers are encouraged to do their own due diligence, and talk to their own licensed investment advisors prior to making any investment decisions.

4) The article does not constitute investment advice. Each reader is encouraged to consult with his or her individual financial professional and any action a reader takes as a result of information presented here is his or her own responsibility. By opening this page, each reader accepts and agrees to Streetwise Reports’ terms of use and full legal disclaimer. This article is not a solicitation for investment. Streetwise Reports does not render general or specific investment advice and the information on Streetwise Reports should not be considered a recommendation to buy or sell any security. Streetwise Reports does not endorse or recommend the business, products, services or securities of any company mentioned on Streetwise Reports.
5) From time to time, Streetwise Reports LLC and its directors, officers, employees or members of their families, as well as persons interviewed for articles and interviews on the site, may have a long or short position in securities mentioned. Directors, officers, employees or members of their immediate families are prohibited from making purchases and/or sales of those securities in the open market or otherwise from the time of the decision to publish an article until three business days after the publication of the article. The foregoing prohibition does not apply to articles that in substance only restate previously published company releases.

Charts and graphics provided by the author.