All three have Buy recommendations on this exploration company.

Newrange Gold Corp. (NRG:TSX.V; NRGOF:OTCQB), a small-cap exploration company that has found high-grade gold mineralization on its property in Nevada, has caught the attention of industry observers. Analyst Mark Reichman of Noble Capital Markets rates Newrange Outperform. Gwen Preston of The Maven Letter initiated coverage of Newrange on April 21 with a Buy rating. And, on June 6, technical analyst Clive Maund called the stock a Buy.

Noble Capital Markets has a US$0.20 target price on Newrange. The stock is currently trading at around US$0.13 on the U.S. OTCQB market and CA$0.16 on the TSX Venture Exchange.

Gwen Preston stated, “I like the story and the targets they will test over the next 6-12 months. . .I figure I’ll buy now, ahead of any potential price creep as the new Newrange story gets out.”

Technical analyst Clive Maund charted the company and wrote on CliveMaund.com on June 6 that Newrange “has succeeded in breaking clear above its falling 200-day moving average which has resulted in a bullish cross of its moving averages, such as often precedes a new bull market.” He added, “It has big upside potential from here, especially as it has just resumed drilling at its flagship Pamlico project in the Walker Trend in Nevada.” 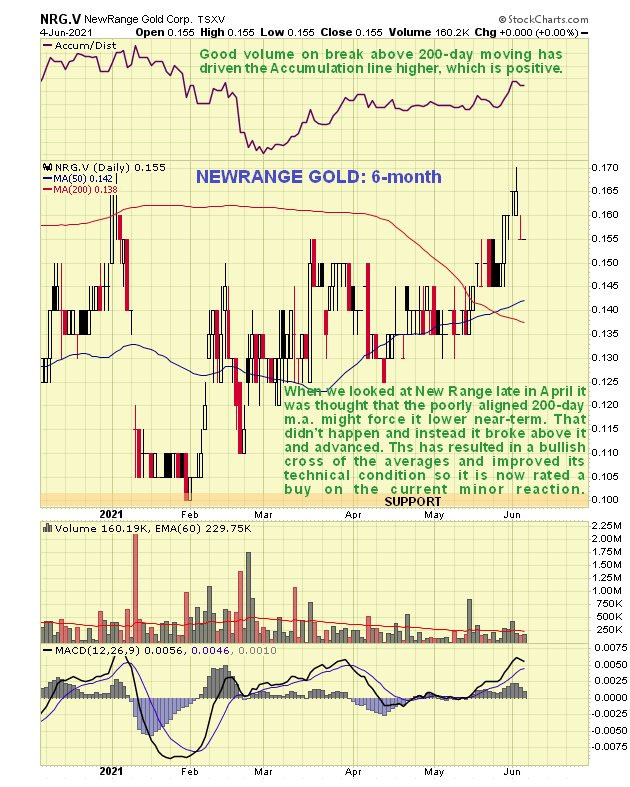 Why has Newrange grabbed their attention?

The company holds two district-scale properties, Pamlico in Nevada and North Birch in Ontario, and exploration is gearing up at both. Pamlico was the site of historical gold mining dating back to the late 1880s but until Newrange came along, it hadn’t seen much in the way of modern exploration. And North Birch, in northwestern Ontario’s Red Lake Division, also is underexplored.

But that is changing. Newrange raised approximately CA$3 million this spring through a combination of flow-through and non-flow-through financings, so it has the treasury to plow ahead with exploration plans. On May 13, Newrange announced that it had started up drilling at Pamlico, following up on prior drilling to focus on delineating a “new high-grade zone.”

Noble analyst Mark Reichman raises the possibility of a “multi-million ounce gold resource in the making at Pamlico.” He commented that the Induced Polarization (IP) survey was “successful in further defining and extending known anomalies and identifying others that had not been previously recognized,” leading to Newrange staking additional ground, and more than doubling the size of the property.

“Newrange has made significant progress with its exploration and drilling program at Pamlico,” Reichman wrote. “The recent discovery of additional high-grade gold mineralization close to the Merritt Zone appears to affirm management’s belief that multiple high-grade zones surrounded by halos of lower grade material exist over a much broader area.”

Gwen Preston noted that management decided to run the IP survey at Pamlico to “help with the overall geologic framework. . .As a result, Pamlico now has three interesting targets.”

With the drill bit now turning at Pamlico, assays should start to be released at what Reichman calls a “district-scale opportunity.”

At the North Birch property in Ontario, Newrange has completed an Induced Polarization survey with the goal of outlining a number of high priority targets for the upcoming summer drill program.

Reichman noted that the survey “revealed several well defined anomalies to target for the summer drilling program,” adding, “with the completion of the IP survey and proceeds realized from the sale of flow-through units, the company is poised to accelerate progress at its North Birch property.”

Gwen Preston noted that North Birch is an iron formation (IF) gold target. “IF gold deposits are well known; the closest large one hosts the Musselwhite mine about 190 km to the north, which has produced or still offers in reserves over 8 million gold ounces.” She pointed out that “between [CEO Robert] Archer’s experience at Musselwhite and [President and Chairman Robert] Carrington’s previous long experience at Springpole (the 4.7M oz deposit just 12 km to the east that First Mining Gold is advancing) the NRG team is well suited to explore this area and target.”

Newrange Gold has approximately 150 million shares issued and outstanding and 173 million fully diluted. Insiders own 9% of the shares and around 30% are closely held; institutions own about 9%.

Read what other experts are saying about:

Disclosures from Resource Maven
Companies are selected based solely on merit; fees are not paid.

The publisher, owner, writer or their affiliates may own securities of or may have participated in the financings of some or all of the companies mentioned in this publication.

Disclosures for Noble Capital Markets, Newrange Gold Corp, April 27, 2021
Company Specific Disclosures
The following disclosures relate to relationships between Noble and the company (the “Company”) covered by the Noble Research Division and referred to in this research report.
The Company in this report is a participant in the Company Sponsored Research Program (“CSRP”); Noble receives compensation from the Company for such participation. No part of the CSRP compensation was, is, or will be directly or indirectly related to any specific recommendations or views expressed by the analyst in this research report.
The Company has attended Noble investor conference(s) in the last 12 months. Noble has arranged non-deal roadshow(s) with investors in the last 12 months.
Noble intends to seek compensation for investment banking services and non-investment banking services (securities and non-securities related) within the next 3 months.
Noble is not a market maker in the Company.

RESEARCH ANALYST CERTIFICATION
Independence Of View:
All views expressed in this report accurately reflect my personal views about the subject securities or issuers.
Receipt of Compensation:
No part of my compensation was, is, or will be directly or indirectly related to any specific recommendations or views expressed in the public appearance and/or research report.
Ownership and Material Conflicts of Interest:
Neither I nor anybody in my household has a financial interest in the securities of the subject company or any other company mentioned in this report.

CliveMaund.com
Clive Maund does not own shares of Newrange Gold, and neither he nor his company has a financial relationship with the company.