Kalo Gold is a new company developing a 36,000-hectare property in Fiji.

Kalo Gold (KALO:TSX.V) has “District Scale Potential,” which is to say it is large (100 X bigger than NYC’s Central Park), contains 158,000 inferred historical ounces of goldand is 98% unexplored.

Since Kalo began trading six weeks ago, gold has gone down USD $100/ounce, while Kalo’s stock price has doubled.

On March 21, 2021, Kalo released initial assay results from the first two holes of the drill program in the Qiriyaga Zone.

Kalo’s CEO, Fred Tejada, is an exploration veteran with strong track record in epithermal gold and copper exploration. As VP of exploration at Panoro Minerals, he designed drill programs for two major copper projects in Peru.

“Kalo Gold has the potential to be a district scale high grade gold discovery,” confirmed Tejada, “We have at least 14 prospects within our property.”

With the recent $3.7 million financing, Kalo is well funded to carry out an initial drilling program.

The Kalo exploration team has been on the ground since December, 2020 conducting soil sampling, core review and geological mapping. Kalo is preparing for the next phase of exploration program.

“We have a very strong shareholder base,” Ma told Streetwise Reports, “We built the CPC very closely with our partners at Haywood Securities.”

The CPC (Capital Pool Company) is a unique Canadian invention that supports earlier stage private companies to complete a go public transaction,” states the TSX. “A Qualifying Transaction is effectively a reverse takeover of a CPC by an operating business.”

“Investment bankers and high net worth investors took down chunky bits of the initial Kalo Gold financing,” explained Ma. “We’re very happy with the quality of our shareholders and their strength and expertise gives us a solid foundation.”

Ma concurs that having the shares in “strong hands” is important but the quality of the asset is paramount.

“A good company is always going to be a good company, regardless of where the market’s at,” stated Ma, “We are cognizant of precious metals prices, as well as the overall economy. Inflation rates, for instance. We are bullish on gold long term.”

Mention “Fiji” and most people think of beaches and palm trees, but in fact Fiji is a mature mining jurisdiction that generates about 15% of its GDP from extraction industries. 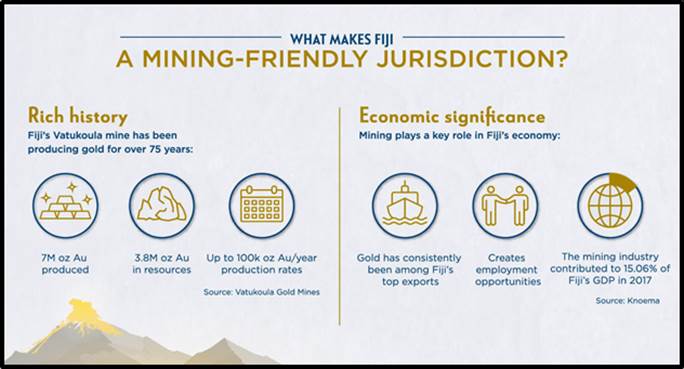 “Compared to other nearby jurisdictions, such as Papua New Guinea, Fiji is more favorable and mining friendly,” confirmed Tejada. “Kalo’s founders have been operating in Fiji for over twenty years. Internally, we have very strong relationship with the local community and the government.

“One of the founders of Kalo Gold, Michael Nesbitt, remains with usas our Senior In-Country Managerso there is continuity with those relationships,” added Tejada.

Nesbit has 10 years of exploration and development experience of mineral properties in Fiji, South Pacific and Africa. The Nesbitt Family developed a bauxite mine and have JV’d the mining operations to a major Chinese mining conglomerate.

Kalo Gold’s land package sits on the Pacific Ring of Firea 40,000 kilometer-long, horseshoe-shaped chain of mineralized belts and trenches that stretches from the tip of Chile all the way to Alaska. 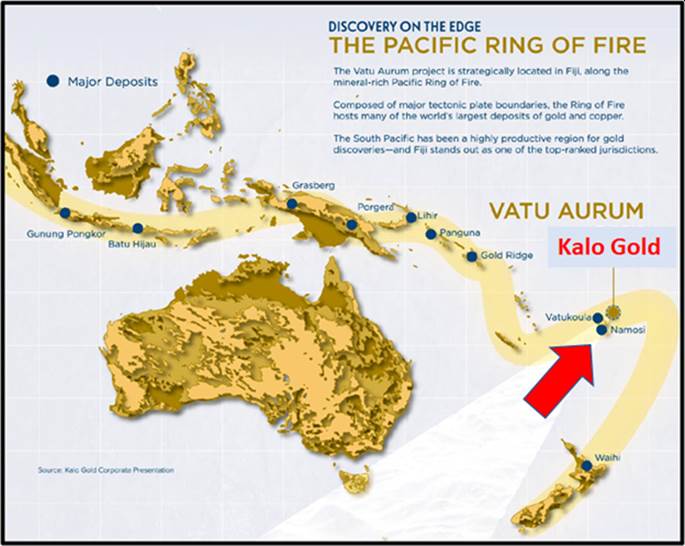 “The Pacific Ring of Fire hosts copper and gold deposits in Chile and significant gold deposits in Japan, the Philippines, Indonesia and Papua New Guinea” confirms Tejada. “These deposits tend to have geological similarities, which is beneficial to our exploration program.”

“We have drilled less than 2% of the property,” stated Tejada, “There is enormous exploration upside. We are able to move more quickly and efficiently because we own a drill rig, operated by local drillers who are employees of Kalo Gold.”

Ma confirms it’s a significant advantage for an explorer to own its own rig.

“It saves us the expense and hassle of mobilizing a rig from another part of the world,” states Ma. “It was one of the cost-savings factors and efficiencies that attracted us to this project.”

“We are dedicating $1.52 million to the phase one program. We’re well-funded for phase one, and once complete, we’ll immediately start planning for phase two.”

David Medilek is a Kalo Gold Special Advisor. In addition to serving as VP of Business Development for gold producer K92 Mining, Mr. Medilek is a director of Minaurum Gold and Northern Superior Resources.

David Whittle, CPA, CA, is a Kalo Gold director. With over 25 years of senior executive experience in the mining industry, he was formerly the CFO at Alexco Resource, which operated a high-grade silver mine in the Yukon.

Cam Grundstrom is a Kalo Gold co-founder and director. A mining engineer by trade, he has worked at Placer Dome (Papua New Guinea), BHP, Ekati, Island Copper, OK Tedi and Suncor. Prior to securing the Kalo licenses, Grundstrom conducted and extensive review of the top 10 prospective areas of Fiji.

Dr. Russell Fountain, PhD, is a Kalo Gold Special Advisor. The founder of Exsolutions Pty. Ltd., a mineral exploration consultancy that specializes in gold and base metals. He was also a director of Geopacific Resources that held the largest mining concessions in Fiji, including five copper/gold projects 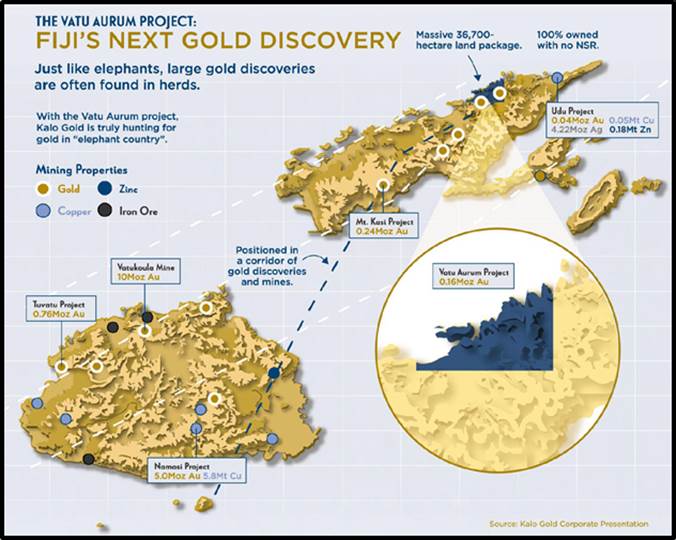 We ask Ma if he perceived Bitcoin to be in competition with gold for investor dollars.

“I invest in crypto companies,” stated Ma, “But I think gold will always have its own investor base. We are very long on precious metals. Gold will attract different investors than Bitcoin.”

Kalo is now drilling the third hole, KGD-03, about 130 meters northwest of KGD-01, at a targeted depth of approximately 350 meters.

The soil sampling program in Qiriyaga Zone was recently completed and the assay results are pending and the IP survey started April 5.