In what may be looked back upon as a historic debate, Stansberry Associates’ Daniela Cambone was the moderator in “Bitcoin vs Gold: The Great Debate with Michael Saylor and Frank Giustra.”

At one point, under the topic of supply dynamics, she posed to Giustra the question:

Michael has said that as the price of gold goes higher, so does the incentive to mine and prospect it… Ultimately you have to find something that you can’t print more of, that doesn’t have its fundamental underpinnings tied to fiat currencies.

The average period between discovery and production is 10-20 years, and sometimes longer, with the grades getting lower and lower. No world-class discovery has been made in the last thirty years. All the gold discovered in the last ten years is less than half the amount of the gold that was discovered in just one year – 1990 – when gold was under $400/ounce.

The gold mining industry is facing an existential crisis when it comes to its reserves; they’re depleting them and they can’t be replaced.

Since that interview, the “digital gold-silver analogs” – Bitcoin and Ethereum – have dropped 60%, gold is flirting with a 9-month upside breakout, and retail supplies of both gold and silver, at robust premiums, remain problematic and costly to acquire.

So, what’s in the gold box and how will that affect investors for the rest of this decade?

For a number of reasons, the gold supply box will increasingly struggle to meet demand, a continuing secular trend, even in the unlikely event that governments finally get their fiscal houses in order, turning around well-deserved public mistrust.

They publicly work tirelessly to eat away at our financial integrity via inflation – because it’s the only way of ever hoping to pay off the insane deficits they’ve been running. So, why not believe them? 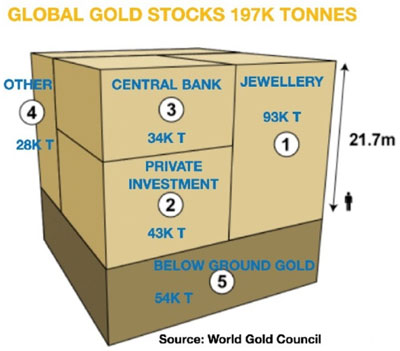 Why Supply Surprises Will “Underachieve”

ESG (Environmental, Social, and Corporate Governance) is the elephant in the room.

This metric outlines the core central factors present in measuring the sustainability and societal impact of an investment in a company or business.

It’s come to define virtually every operational mining plan; green field exploration for a new deposit, the mine’s environmental footprint; and the way the locals and surrounding countryside are treated during the years/decades in which the mill, tailings, and mining digs are in operation.

An outgrowth of this is that production from the few new big projects will be pushed out many years longer than would ordinarily be the case. Several “metal monsters” may not even go into production until after the current cycle has run its course.

Here Are Some Big Mining Projects That May Never Make It…

In contention with the locals since the 1990s and after the expenditure of several billion dollars, “The final nail in the coffin” as a reporter phrased it, took place in Sept 2018 when a Chilean court ordered a “total and definitive closure” of the project on environmental grounds.

Pebble: This proposed massive Gold-Copper-Moly mine in Southwest Alaska’s Bristol Bay area, discovered in 1988, would sit astride a web of streams and lakes, home to half the world’s Sockeye Salmon.

A bone of contention since it was first proposed, the owners persevere on permitting, even as four mining majors walked away after spending several hundred million dollars. The footprint would involve digging an open pit hundreds of feet deep and construction of permanently-maintained-for-a-century tailings dams hundreds of feet high.

Navidad: Though actually a silver project, this 700-million-ounce deposit has been sidelined for years by resistance in Argentina’s Chibut Province against the use of cyanide. This may someday change, but like the other two Tier-1 gold projects, it’s emblematic of the hurdles increasingly standing in the way of large gold deposit mine development.

A similar argument can be made against a number of large copper plays that, even in a best-case moving into production scenario, would take many years and several billion dollars each.

Dancing on the volcano’s edge. Sean Brodrick of Weiss Ratings addresses the pricing pressure building under gold stocks (and gold) as more fiat is printed globally, and during the silly season in Germany, over 200 banks now charge their clients to hold a cash balance.

A friend of mine in the financial business, one of the best stock analysts I’ve ever met, called it “holding a dance contest on the edge of a volcano.” It’s like you’re in this crazy dance contest. The prize is $10 million. The hard part is it’s being held over a pit of boiling lava. Many people will quit. In fact, you’re counting on them to quit.

Meanwhile, you keep dancing, because every step brings you closer to the prize. Why am I so sure a big rally is coming? Because the underlying fundamentals haven’t changed at all.

Don’t be blind to the danger. Consider the words of Hugo Salinas Price, a thought leader in Mexico…

When the “King of Fiat” – the dollar – suffers a sudden loss of value in terms of other currencies, it will dawn upon investors that owning dollars (and other fiat currencies) is a losing proposition, and they will rush, in mass, to acquire whatever they can of the yellow metal.

Official selling to break the price will, at best, only slow down its rise and present a momentary opportunity for panicked investors to acquire some gold – far less than had they not been so blind to the danger. At this point the price will be rising by hundreds of dollars an hour.